Of all colored gemstones, I find the tourmalines to be the most fascinating, as they are broadly diverse in colors, often in combinations of colors and sometimes phenomenal in form. I began collecting tourmalines more than 30 years ago – long before they made the jewelry retailers’ “most-popular list.” I am always keeping an eye out for unique and exceptional tourmalines. 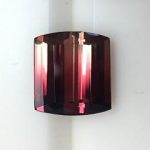 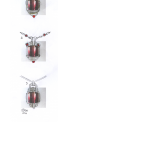 The tourmaline used in the pendant is one I bought about seven years ago – definitely one-of-a-kind. It is a bi-color crystal exhibiting rich ‘wine colors’, from cabernet reds to chardonnay golds. This crystal was fashioned and polished by a veteran colored stone cutter/artist. The unique faceting array mixes, separates and rolls the colors through the whole crystal, creating a kaleidoscope-like movement of light.

Last year a client commissioned me to use this unique gemstone in a pendant/necklace in a “Steampunk” inspired “lantern” motif. I researched the genre, and made preliminary sketches for three possible variations. My client chose one, but unfortunately, the project never went forward. Later however, I decided the designs were solid, and the necklace should be produced anyway! I chose my favorite (No.3), which I have entered in the upcoming 2016 AGTA Spectrum Awards Competition.

Get tips on how to care for & style jewelery. Early access to new designs & deals.
Quenton Elliott Jewelers